I developed this recipe for an Axis deer, classified as an exotic species as are fallow deer and other non-native cervids; they are legal game throughout the year. They are also incredibly tasty.

The key to this roast—as it is with prime beef—is the dry-aging process.

6 to 8 ribs celery, to make rack to hold roast

For the chimichurri sauce:

Two days before cooking, thaw a frozen rib roast in the refrigerator overnight.

The next day, pat the roast dry with paper towels, place it on a rack over a small pan to catch the drips, and return to the refrigerator, uncovered, to dry-age for at least 24 hours.

One hour prior to cooking, remove the roast from the refrigerator and let it come to room temperature.

Make the chimichurri sauce: Combine all the ingredients in the bowl of a food processor fitted with a metal blade, and process until somewhat smooth, but retaining a bit of texture. Transfer to a small bowl, cover with plastic wrap, and refrigerate until you begin roasting the meat. Serve at room temperature. Yields about 2 cups.

Lightly coat the rib roast with a bit of oil, and salt and pepper it. In a cast-iron skillet large enough that the roast doesn’t touch the sides, over medium-high heat, lightly sear all surfaces, using tongs to turn the meat and to hold

it in place while searing.

Remove the meat from the skillet and set aside. Fashion a rack with the celery ribs in the skillet, to hold the roast, so that no part of the meat is touching the cast iron.

Place the skillet in the oven and roast for 20 to 25 minutes, or until a meat thermometer placed in the thickest part of the roast reads 125° F. Transfer the roast to a carving board, tent loosely with foil, and let it rest for 10 minutes. Carve into two-rib sections, and serve with the chimichurri sauce. 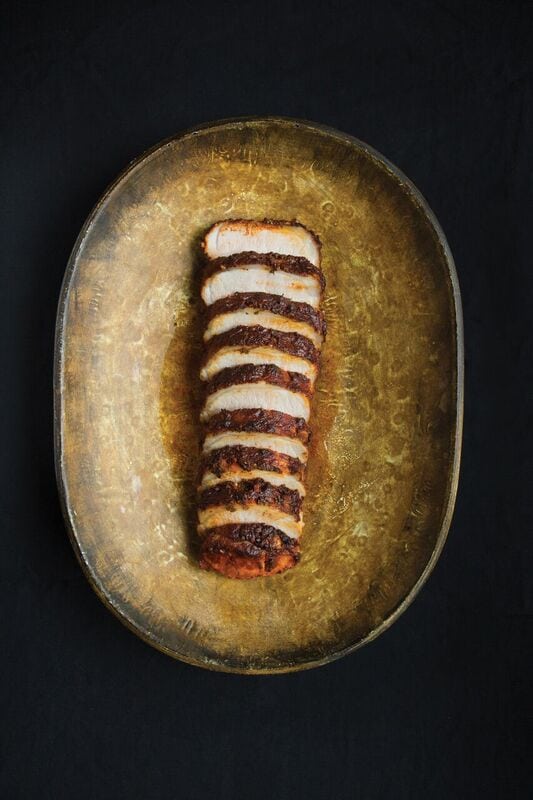 Next Story
Oh Canada! Explore North of the Border