If there were ever a “perfect time” for watersports, it would be in the summer. With the sun beating down on you as you travel around a river bend, and the water rushing up the side of your vessel to splash the sweat off of your face, you will feel exhilarated. Watersports will appeal to any adventurer’s appetite for a thrill and a connection to the outdoors.

The most popular activities include canoeing, kayaking, rafting, and stand-up paddleboarding, and we will dive into the history and the specifics of each sport, as well as name off some of the best places to try them out.

Whether you are a consistent fan of watersports, or an intrigued beginner, you are sure to find something that fits your style. Check out these gnarly ways to hang ten, or tear through riptides and stabilize during slacks. If you’re thirsting for the open water, we’ve got your drink of choice!

Paddleboarding originated in: Hawaii – no surprise there! The island waters of this tropical paradise have been the heart of Hawaii’s community for many years, and generations of surfers and water enthusiasts keep coming back to her shores, in search of a great wave and a good time. Paddleboarding, which is also referred to as SUP (stand-up paddleboarding), is believed to have come about in the 1960s, when the “Beach Boys of Waikiki” paddled out on their longboards to take pictures of tourists that were learning how to surf, and had to stand up to do so. After the 1990s, with the help of Laird Hamilton, a surfing pioneer, paddleboarding became more widely-known, and thus turned into a popular watersport.

“It has [since then] become the fastest growing style of watersport within the United States.” – Travel Channel.

The first place outside of Hawaii that paddleboarding became prevalent was in California, naturally. Today, paddleboarding is still one of the top watersports of places like San Diego, Santa Barbara, and Coronado Island. There are also a ton of places to catch a SUP tour in Florida, such as Key West. What better way to explore the mangrove forests than standing up on a paddleboard and sliding through the calm waters?

Not going to be able to make it to the Florida shores or the California coast? That’s okay. Paddleboarding is popular on lakes and calm rivers as well, so try Canada or eve Seattle, where they offer tours along the waterways.

It can be hard now-a-days to tell the difference between a new canoe and a new kayak, especially the ones that are used for sporting events, such as the Olympic Games. Canoe sprinting was officially named a discipline in Berlin in 1936, and today, both kayaks and canoes are used for the events. Further, we learn that the kayak originated from the Eskimo people, where the word kayak is rooted to “man boat,” and was used by the men who ventured out into the icy waters to fish. The kayak was made with animal skin stretched over top of it, which enclosed the deck, except where the paddler sits inside of the vessel itself. This was so that the freezing waters did not enter the boat. Therefore, in essence, a kayak is a type of canoe.

Canoes, on the other hand, have been around for hundreds of years, and were used for everything from transportation to warfare. A canoe is designed with an open deck, or “hollow,” in which the paddler sits on a bench. In modern sporting events, these classic differences can sometimes be hard to notice, so the main defining characteristics have become the paddles themselves.

A canoe paddle has a single blade and is used in a switching motion to paddle forward. A kayak’s paddle has two blades, one on either end, with which the paddler will rotate through the water. Kayaks are also built for moving through more treacherous waters, such as saltwater and rapids, though some skilled paddlers still prefer the canoe.

For the ultimate canoe trip, take a journey to Buffalo National River, in northern Arkansas. Buffalo River is protected by the National Park Service, and is over 100 miles long. The river offers a variety of different intensities, but stay away from the upper sections if you’re a beginner. The upper sections are very difficult to master, and are suitable only for experts and guided trips. Campsites can be seen along the riverbank, and paddlers are welcome to travel the entire length of the river, making for a remarkable dual camping and canoeing adventure. To paddle through the entire river would take nearly ten days, depending on water levels and personal skillsets.

Another spectacular place to spend time on the water is at the Acadia National Park in Maine. The Maine Island Trail is over 300 miles long, and it follows the coast of the park. The trail was created in 1993 and was the first water trail in the United States. All of the trail sites are accessible to watercraft and this is the perfect place for sea kayaking. Travel along the coast and camp out among the rocks and grassy inlets.

The inflatable river raft was first invented by United States Soldiers in the early 1800s. Before this time, most rafts were constructed out of flat wood. The first rubber raft was created by Lieutenant John Fremont and inventor Horace Day, and floated down the Platte River in 1842. In the mid-1950s, John D. Rockefeller opened a resort in the Grand Teton National Park, in Wyoming, which allowed visitors to go on one of the first guided rafting expeditions. Rafting became extremely popular by the 1970s and has been a favored watersport since then.

Simple rafting can be done safely and for leisure enjoyment, but whitewater rafting is much more dangerous and physically demanding. When participating in a whitewater rafting trip, you run the risk of being thrown out of the boat by rushing waves or hitting large rocks, as well as falling out when riding the water downhill, such as downstream on a river towards a waterfall.

Whitewater rafting sites are rated by class. Class I is a simple trip, with not much danger. Class VI is nearly suicidal, and waters of this class are considered un-raft-able. It is best to opt for Class I or II when just starting out, and if you like what you experience, then try Class III or IV. Class V is for experts only, and usually not accomplished without the help of guide service. Most whitewater rafting adventures are guided no matter what class you are considering, which is helpful since the watersport is among the more dangerous styles.

The best place to try your hand at whitewater rafting is along the Colorado River in the Grand Canyon. This is the most popular place to book a rafting trip and extremely touristic. Trips can range from a simple day’s worth of rushing through the waters, to a luxurious 6 or 7-day excursion through the canyon. The best route for booking a trip of this nature in the Colorado River is to plan well in advance.

For a more last-minute or spur-of-the-moment trip, try the Salmon River in Idaho or the Tuolumne River in California. Cherry Creek in Tuolumne is a class V, so be careful!

Whether you’re looking to escape into the quiet portion of nature and take a ride down a calming river in the middle of the forest, or if you’re hoping for something to get your adrenaline pumping, these watersports will surely keep you cool and content this summer, and hopefully keep you coming back for more next season! 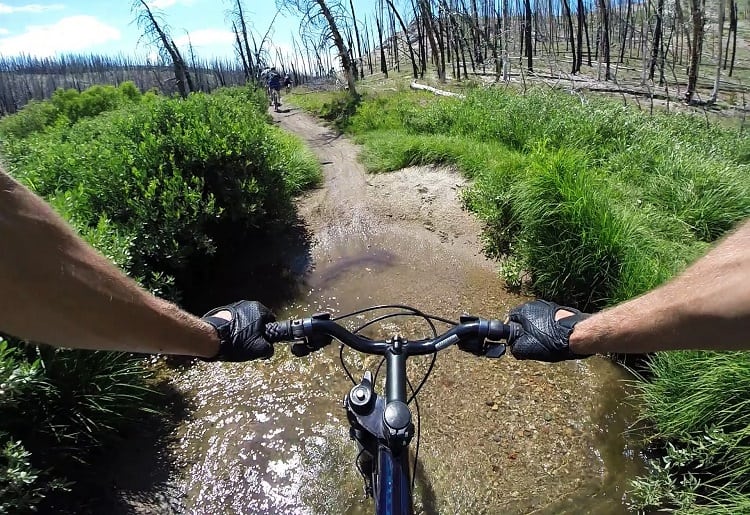